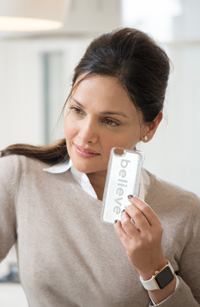 Rachel Verghis, founder of goo.ey will be joining us on Twitter for #MIVReveals on Wednesday 23rd March 2016 at 4pm.

After a career in banking spanning 15 years, Rachel Verghis founded goo.ey in 2014 – an innovative digital phone case company inspired by art and design. The key selling point: the cases adhere strongly to surfaces like glass and mirror while being non-sticky and smooth to the touch, making them the ultimate hands free accessory.

Realising that she wasn’t alone in her need to put her phone out of her son Louis’s reach, Rachel knew there must be a better solution than propping it against random objects or surfaces. And so goo.ey was born, giving her a business venture she could build from home. When the product launched, it was well received; so well that it’s now stocked in Selfridges, Fenwicks and Amazon and exported internationally.

With the product established, Rachel’s attention turned to the case design. She believed that device cases had been largely overlooked as a medium for expression. Her love of contemporary art led her to explore the possibility of uniting goo.ey and the art world and a first collaboration with Chinese artist and activist Ai Weiwei.

Described by Rachel as a ‘billboard for self expression’, the goo.ey case gave Ai a platform for reaching the masses. Almost everyone carries a mobile in their hands, and so it was a simple and effective way to promote the cause of human rights.

Ai Weiwei’s art project ‘Trace’ gave a voice to 176 prisoners of conscience by creating their portraits from LEGO bricks. The goo.ey collection of cases featured each of the portraits, with 30% of sales going to Amnesty International and 15% to the FOR-SITE Foundation. The collaboration transformed goo.ey from an innovative piece of functional kit to a medium for political and creative expression.

Collaborations with Sophia Webster, Henry Holland and Kelly Hoppen followed, testament to Rachel’s identification of goo.ey’s relevance to the fields of fashion and design. With more high profile partnerships in the pipeline, the brand will cement its position as a powerful platform for the world’s most creative industries.

A year after launch and goo.ey is set to become a household name. It occupies a unique space where art meets product innovation, giving people around the world an accessory that not only frees their hands, but doubles as a canvas for self expression.

If you want to hear more from Rachel Verghis about goo.ey, then tune into our Twitter interview on Wednesday 23rd March 2016 at 4pm, following the hashtag #MIVReveals.