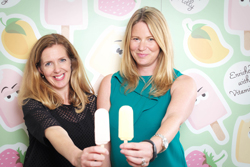 Co-founder of Claudi & Fin, Lucy Woodhouse, will be joining us on Twitter for #MIVReveals on Thursday 11th May 2017 at 4pm.

Lucy and and her co-founder Meriel met at a playgroup when their children, Claudia and Fin were very little. The pair bonded over their inability to do the actions to ‘Wheels on the bus’ and a firm friendship was formed.

As the months went by, they discovered a mutual love of great tasting, healthy food, especially for children. After struggling to find any natural ice lollies with wholesome ingredients, they set about making their own at the kitchen table. After months of taste testing they perfected the recipe for Claudi & Fin’s first product – a naturally delicious frozen lolly made with Greek style yoghurt, real fruit and vitamin D. The lolly was a hit with their children and chief taste testers (Claudia and Fin), but also with Sainsbury’s, who were so impressed that they put it straight into their stores.

If you want to hear more about Claudi & Fin, then tune into our Twitter interview on Thursday 11th May 2017 at 4pm, following the hashtag #MIVReveals.